A couple of weekends ago we traveled down to Port Canaveral to take a quick 3 night cruise on the Disney Dream. We stayed in a family suite with balcony and I was amazed by the amenities in the room and throughout the ship. It truly was a dream!

The room itself was spacious. When you walk into the room, you enter a small foyer with two 1/2 baths on one side and a large closet on the other. Each bath has a sink and either a toilet or a shower/bath combo. Past that is a queen size bed with nightstands on either side. A pulled back curtain shows a living area with desk, tv and couch. At night a bunk bed descends from the ceiling and the couch is converted to a second bed. The curtain can be drawn between the queen bed and bunk beds to provide some privacy and a sense of two rooms. The balcony was not huge, but has room for two chairs and a table and was an excellent place to watch the sunset or enjoy a morning cup of coffee.

The ship itself was one of the largest in the Disney fleet. Both the Disney Dream and the Fantasy are the same size. The Dream has 14 levels with the pools on the 12th level and theaters, shows, shopping and dining mostly on levels 3 through 5. The ship was beautiful. Photos really do more justice than my mere words, so check it out! 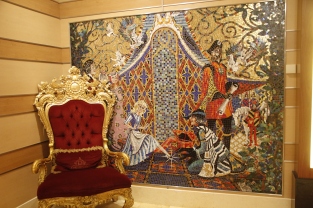 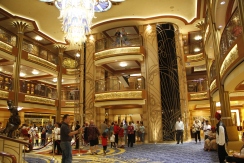 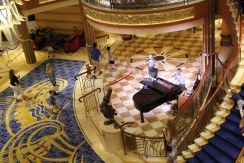 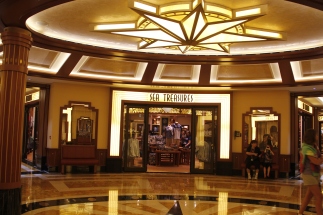 The middle of the ship didn’t even feel like being on a ship! When we moved at night, the only time I felt the ocean was at dinner. Somehow staying seated did give me a minor need of Dramamine, but once I was walking around again I was fine.

Food. Did I mention food? It’s good that we only went for 3 nights our first Disney Cruise. My waistline could not take more. The food was AMAZING. There are three restaurants on the Disney Dream and each night you dine in a different location. Each restaurant has a different theme and is a completely different experience. We were assigned a server (Victor), assistant server (I Gede)  and head server (Selo) that followed us to each restaurant. It was wonderful to have the continuity each evening and get to know each of our servers. The restaurants were amazing. The architecture and design that went into each establishment was breathtaking. Realizing that it was on a ship made it even more amazing.

Ok. Now to the kids. Most families choose the Disney cruise line for the kids. They know how to make an amazing experience even better and our cruise was no exception.  My boys are 6 and 12 which fit perfectly into the demographic for the maximum amount of activities. The Oceaneer Club and the Oceaneer Lab are for kids from 3-12.

When we checked in at the terminal, the kids were given a wristband that identified them and us as their parents. The band remained on their wrists until the last night of the cruise when we returned it for a deposit. This band was amazing. when the clubs operated in secure mode, the staff could tell us exactly where our boys were at any given time. This made pick up at the end of the evening much easier as these clubs on the Disney Dream were huge. 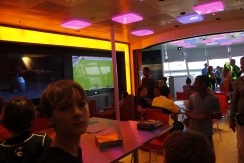 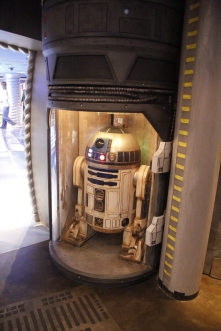 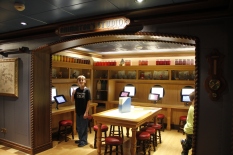 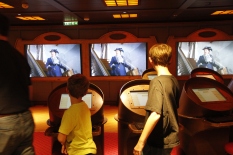 Part of the club was recently remodeled to fit the Star Wars theme complete with a Millennium Falcon cockpit. The lab and the club both consisted of a large main room and many smaller themed rooms. Disney movies played, iPads and computers were available and the entire Disney Infinity console line was represented for play. On the last night, Riley did not want to leave until they closed. Unfortunately, we left the ship early the next day and could not let him stay until midnight!

Our cruise visited Nassau and Castaway Cay. We chose to stay on the boat at Nassau as there was so much to explore and we had visited Atlantis on our first cruise ever (on a different cruise line). Many other people had the same idea and the ship was very busy.

The second day landed us in Castaway Cay, Disney’s private island and cruise stop. Our day at port was super, super windy. 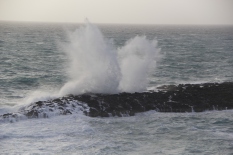 We did not know it at the time, but there were sustained winds that were just at tropical storm strength. We tried to go to the beach and Cameron and Gavin even went swimming for a bit. Riley hid out from the sand and tried to nap. 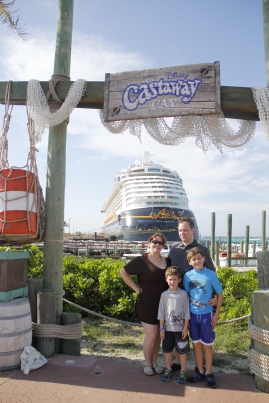 About an hour after getting off of the boat, the rain rolled in and we hid out until the heaviest storms passed. We then made our way back onto the boat and rinsed the sand off. The kids decided they wanted to go back to the magical Kids Club/Lab and we stumbled into a cupcake decorating class.

Freshly decorated cupcakes were a great way to get our minds off of the experience of being sand blasted. I spoke with some of the cast members in the kids club and they said that they had never seen it as windy as it was that day. While the kids hung out, Cameron and I watched Bridge of Spies in one of the movie theaters. (They have first run movies on board!)

We had an absolutely wonderful time and would happily sail with Disney again. Next time we plan to cruise a little longer to enjoy more of the experiences offered. I booked our trip through Brittany Sexton with Glass Slipper Concierge and she was a dream with work with – thinking of all the details and guiding me through the process of booking. If you need a knowledgeable person who loves Disney and wants you to have an amazing family vacation, email or call her and tell her I sent you.

** No part of this trip was compensated or paid for except through my own funds. All opinions are my own. **