These legs should be laying on a beach or paddle boarding. Or even more practically, measuring houses and appraising them. The last week & a half has been slow work-wise. It’s been a nice reprieve from the frantic workload of spring and early summer. Yesterday I came down with what can only be described as a head cold. (To be honest, it struck me Monday night.) I informed my husband that I was allowing myself one day to be sick and get over it. Then I went into work and proceeded to finish a report that was due. In a delightful twist of irony, now that I am finally using this time to nap and get over my malaise, I’ve gotten 3 job requests. I’ve spent the morning napping which is something I never take the time to do. So I guess I really do only have one day to be properly sick. Then it is time to get back to work.

What do you do to get over colds?

My 20th class reunion was this weekend. I’m not entirely sure how I got this far past high school, but we made it and here we are. In the time since I’ve graduated I’ve gotten married, had two boys, changed jobs 9 times, changed vocation at least 3-4 times, started 2 businesses and bought a house. I still live in the area and would happily have my children go to the same school I graduated from.

I was a little tense about going to this reunion because the 10 year still felt a lot like high school. This was a little more relaxed, but still a little of the same. I guess part of the problem is that I don’t know what to ask about except kids, jobs, and new locations. Most people seemed to have moved to the Atlanta area. A few made it north to New Jersey or out west to Texas, Oklahoma or California. We have a couple lawyers in the group, some small business owners and a doctor. I think we’ve turned out ok and continued to make a meaningful contribution to this world we’ve joined.

I did get to reconnect with a few old friends. Ironically, most of the people I hung out with live only 45 min to 1 hour from me, but I’ve seen them very little.

So what did you wish you had thought to ask others at your reunions? Or did you even go to your high school reunion? 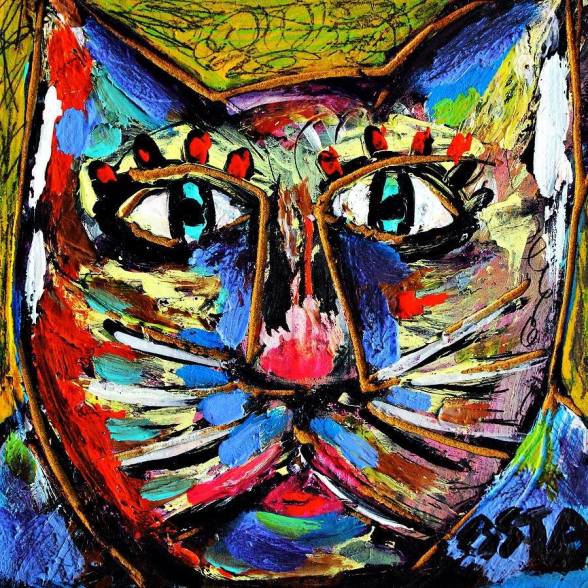 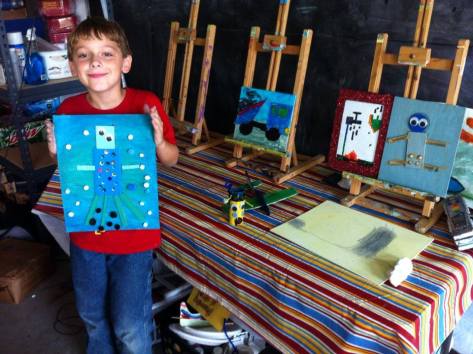 Abrakadoodle was started in our community in 2008, when my firstborn was 4 years old. I remember meeting Erin, the owner, when she joined our playdate group to do an art project together with our little ones. I was impressed by the frames that the artwork went into and the quality of the finished products. The kids had a blast getting messy creating art and the moms had a fridge worthy piece of art to show off!

Abrakadoodle has grown exponentially since it started in 2008 and went from a mobile location to over 16 locations throughout the Emerald Coast. They offer classes that range from Mommy & Me for toddlers up to camps designed for middle schoolers. In addition they also offer adult painting nights, pinterest classes, and they have partnered with local artist Alan Moore for recycled folk art classes.

Recently, Erin has branched out to help out local organizations within our community. There is a class this Thursday to benefit Feline Friends of Destin, a local charity that works with the local cat population.

By joining them Thursday evening, you will enjoy a painting class that results in the lovely cat photo above to take home and showcase, plus the added benefit of helping out a local charity!

If cats aren’t your interest, there is another charity painting/mixed media event in August for the whole family.

Food for Thought outreach helps to feed local kids via the schools. Its a great program that also collects backpacks to help equip kids with the nutrition they need to thrive. This class is being held on a Saturday morning so that you can bring the little ones to participate.

What are your favorite ways to give back to your community?

**disclaimer – I was not compensated for this post. I do volunteer with Abrakadoodle and support them with my time. All opinions are my own and unsolicited.**

A few months ago my mother in law suggested that my firstborn should get horseback riding lessons. Since she also bought the boots, covers, and lessons, I figured “Why not?”

She was right. Firstborn LOVES it. His teacher says that he does very well with his lessons and has picked up quite a bit naturally.

He is learning how to groom & tack the horse, including brushing down the coat, cleaning the hooves and how to properly put on the saddle and bridle. I think learning how to “drive” such a large animal is helping considerably with his self confidence.

Yesterday Firstborn was able to trot around the arena on his own. It was awesome to watch him.

I found out afterwards that the horse nipped at him when they were getting him ready. His teacher said that Firstborn did get pretty upset about it, but that he moved on from it and kept going.

His lessons are at Rocky Bayou Stables out in Freeport. It is a bit of a drive from Destin, but well worth it.

What are your kids trying out new this summer?

I follow this page on Facebook called Just Eat Real Food. It’s a wealth of information with some neat recipes and ideas. This recipe was posted a few days ago and since I had almost all of the ingredients, I insisted on trying it.
The original recipe is posted here.

I couldn’t find 100% dark chocolate, so I went with the 90% that my local Fresh Market carried.

Line a muffin pan with 6 liners. Throw in your first layer, which is just pure coconut butter. Yum. I got my coconut butter (again, courtesy of Just Eat Real Food) from Tropical Traditions.

I was a little over zealous with the coconut butter, but that was mostly because I misread 2 teaspoons as 2 tablespoons for the first layer. Oops!

Then I melted down the entire bar of chocolate. I don’t own a double boiler, so I stacked a smaller pan inside larger pan with a layer of water in-between. Once the chocolate was melted down, I added coconut milk, vanilla extract, & honey with a pinch of sea salt. I would love to say I precisely measured everything, but I would be lying. I took the original recipe as a guideline, and tried to stay within the proportions suggested. I added additional coconut milk when the chocolate started to thicken a bit.

Then I added the chocolate layer. I put everything back in the fridge and waited for it to harden. It took longer than the 5 minutes of the coconut butter first layer. (20 minutes, estimated)

Once the chocolate layer was hardened, I added the top layer of coconut butter and put it back in the fridge until morning.

This was what awaited me. It was hard to cut in half, but worth it since I new I had to share with hubby. The coconut butter is super hard straight from the fridge and the chocolate layer has a bit more give. The entire concoction is GOOD. I ate one quarter of a cup and gave the other quarter to Cam. He ate it and demanded more. Then he demanded that I make more for our gathering of friends this evening.

The cost of ingredients is a little high, so if I could find a way to make smaller cups (obviously with a lot less coconut butter on the first layer) then I could make it for friends at large gatherings.

How would you improve this recipe? 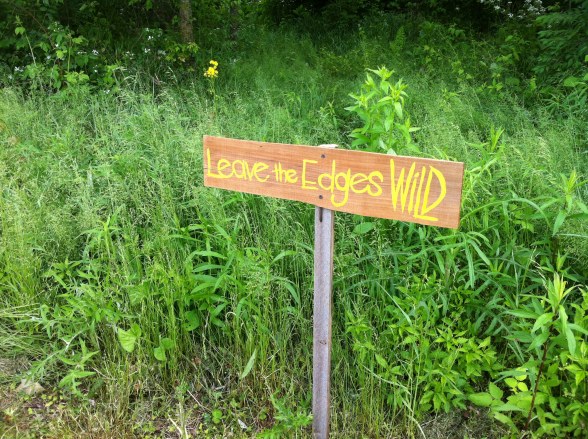 To launch their upcoming album, Over the Rhine launched a campaign to pay for recording costs called Let’s Make a Record. I have followed Linford and Karin since the first release of Good Dog Bad Dog and the thought of seeing them perform live in their backyard really was a dream come true. 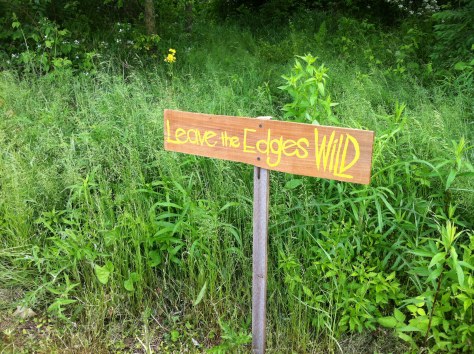 We arrived early – right when things opened at 5pm. They had us parking in a side field and there was already one full row of cars. We started the second row. Beside a row of the swankiest portable toilets I have seen, was the entry area to go into Nowhere Farm. A string of lights graced the pathway and a large tent complete with chairs and stage was visible just through the trees. Cameron and I wandered past the tent and located a grassy area near the backyard fence to lay out our blanket and enjoy the picnic dinner we brought with us. We were quickly joined by a group from Texas to one side and a couple from NY on the other.

There is something about the audience at a Over the Rhine gathering that exudes a sense of peace and thoughtfulness. These people are part of our tribe. I have yet to see anyone treat another poorly at an OtR event. This evening was no exception. In fact, it was even more serene. We flew in from Florida to be a part of this event. I met people from all over the country that flocked in like a long awaited homecoming to listen to this music. 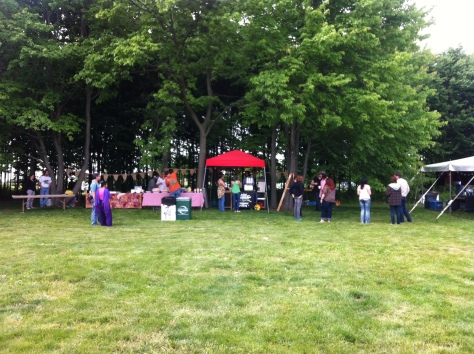 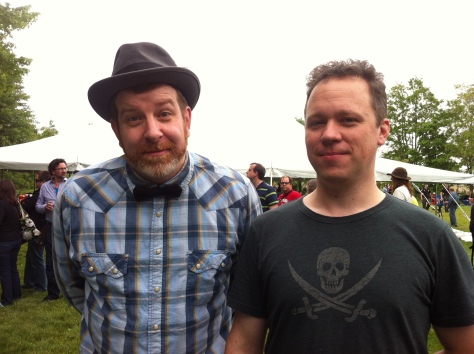 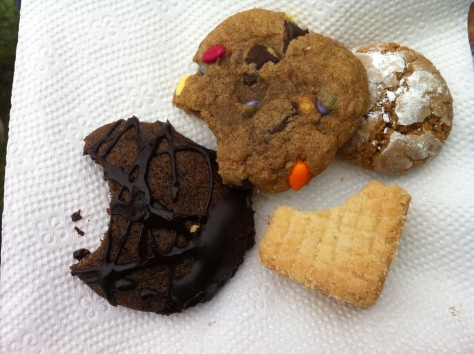 Trying a bit of everything at the Great Cookie Swap. It all was amazing.

The real magic started at 7pm when Karin and Linford took the stage.

Coming out to play.

They introduced the first few songs. Listening to them was pure bliss.

All I Need is Everything.

I was sad to see the evening end. It was one of those moments that you know you’ll hold forever in your memory – to return to as needed. I bought the tickets back in December without giving much thought to IF I could actually swing the trip. My husband bridged the gap and secured us a spot in a delightful Bed & Breakfast, got the plane tickets, and was able to leave our boys with their grandparents for the weekend. I told him he was off the hook for my birthday (June 1)  and our anniversary (June 19).

Port Merch sold t-shirts commemorating the event and I purchased two for us to keep on celebrating the event. I got them last week. I hope this is the start of a collection.